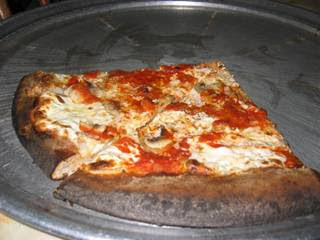 Without a doubt there is no pizza on earth like New York City Pizza. Just ask me and I’ll tell you. And I don’t mean the hole in the wall joints all over Rochester with the falling down banners that tout “New York Style” pizza. I’ve tried them all and they are all nothing more than a loaf of bread with ketchup and cheese whiz slopped on it. I mean pizza made and eaten in the city so great, they named it twice. Pizza with a crust so thin you can fold it and the crust is brown to black.

I should know. I grew up, worked and sweated in one at 698 Fulton Street, Brooklyn New York. I’ve eaten so much pizza pie, I have tomato sauce in my veins. It’s hard to replicate the ingredients such as a 2000 degree oven, hard Brooklyn water, Italian deli mozzarella and straight off the boat olive oil but here it is, as close, as you can get in your home kitchen.

In a small bowl, put the yeast, sugar and water and stir until mixed. Place the mixture in a warm place for 10 minutes until a froth forms. Dump the flour in a large mixing bowl, add the salt and olive oil. When the yeast mixture is ready pour it on top of the flour and mix with a wooden spoon until a ball forms. Turn out on to a floured cutting board. Coat your hands with flour and knead the dough until it forms a ball with a firm consistency. Add flour as needed, a little bit at a time.

Place ball of dough in a bowl that has been coated lightly with olive oil. Turn the dough around in the bowl so that it gets coated with the oil. Cover with plastic wrap. Let sit in a warm place (75-85°F) until it doubles in size, about 1 to 1 1/2 hours. If you don't have a warm spot in the house, put it in the microwave oven and place a note on the door not to turn it on while it’s in there. At this point, if you want to make it ahead, you can refrigerate the dough for tomorrow. Just take it out a few hours before you need it.

When it is ready, knead again, separate into two balls and flatten into two pizza crusts. Exact size and shape aren’t important. Do the best that you can and place the dough into a pan. I have found that the ones with the holes in them work the best if you aren’t using a pizza stone.

Pre heat oven to 450 degrees. Pour a little olive oil on the crust and using the back of a tablespoon spread over crust. Pour a thin layer of tomato sauce on pizza and using the spoon cover crust. Sprinkle garlic, oregano and basil and then the parmesan cheese over sauce. Top with mozzarella and pepperoni then place on middle shelf of oven. Set timer for ten minutes. When time is up, open oven, rotate pan and re set timer for 5 minutes. The time isn’t set in stone as all ovens cook different so keep checking pie and pay attention to the smell. You’ll know when it’s done by that alone. When your crust is golden brown and the cheese is melted it’s time to take it out.

Let it rest for a few minutes before slicing, put some Jerry Vale on the stereo and open a bottle of Chianti. And don’t forget the red checkered table cloth!

Fire Up The Grill, It's Time For... Tony D’s Fireman’s Chicken Barbeque 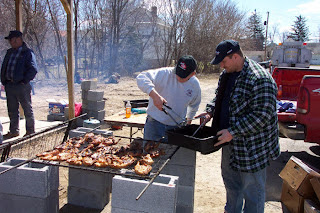 With spring around the corner my mind turns to the great outdoors. I think of gardening, fishing, walks along the lake shore and of course, BBQing! I don’t think there is a better dish on the planet then the chicken you get at a good old fashioned Fireman’s field days. This meal served up with fresh corn on the cob and salt potatoes is my little slice of heaven. I have made this a million times with no complaints. Here’s how I do it…

Get some nice chicken quarters or half’s with leg attached but any pieces will work.

This is the famous sauce created at Cornell University's Farm Home Extension in the 1950's.

Put Ingredients into a blender and blend until smooth. I use a wide mouth water bottle that I got at the dollar store. Add all ingredients and shake like heck. Marinate chicken in sauce for at least 1-2 hours, overnight is better. Don’t marinate more than one night or you will have chicken pickles. Discard marinade.

I prefer indirect cooking in a charcoal grill with lid and smoking woods but this will work with any type of grill. If you are doing them on a gas grill and you want the inside to be perfect without burning the outside, the secret is to par boil the chicken for a few minutes then place on the grill over medium heat.

You can get some smoke flavor even on a gas grill. Soak your wood chips for 20 minutes in water then place in a foil pouch with holes punched in it and place on burner. Experiment with different woods until you find the flavor th
at you like. I like apple for this recipe. The nice thing woods do is add flavor without adding salt.
Turn chicken frequently until done basting with sauce that you didn’t use for marinade and voila you’re done. Another "secret" recipe revealed via the internet.
Posted by Tony D at 5:23 PM No comments: 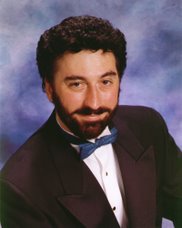 Tony D
Rochester, New York, United States
I'm a mobile Disk Jockey in Rochester New York. I specialize in small to medium venues where I can remember all your names and get on the floor and dance with you. You will find my rates reasonable and I don't watch the clock. When the banquet manager throws us out - That's when the party is over! Call or email me today! Visit my website for more information www.rochester-dj.com

Do a web search here